Everything is on the run --
willows swishing in the sun,
branches full of dip and sway,
falling leaves that race away,
pine trees tossing on the hill --
nothing's quiet, nothing's still,
all the sky is full of song:
"Winter's coming.  Won't be long."

from The Sky is Full of Song selected by Lee Bennett Hopkins, illustrated by Dirk Zimmer, 1983, Harper & Row
Posted by Meribeth Shank at 6:00 PM No comments: 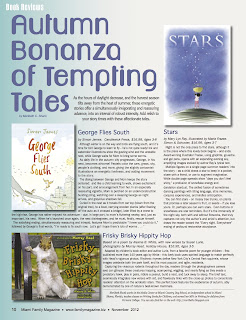