We don't have wars.

We don't have soldiers.

We don't have mistakes in combat.

And we don't have death.

What we do have is

Posted by Meribeth Shank at 6:56 PM No comments:


So I picked out a book
on my own
from the shelf
and I started to read
on my own
to myself.
And nonsense and knowledge
came tumbling out,
whispering mysteries,
history's shout,
the wisdom of wizards,
the songs of the ages,
all wonders of wandering
wonderful pages.


from Moon, Have You Met My Mother? The collected poems of Karla Kuskin, illustrated by Sergio Ruzzier, 2003, HarperCollins
Posted by Meribeth Shank at 11:50 AM No comments:


Where do you get the idea for a poem?
Does it shake you awake?
Do you dream it asleep
or into your tiny tin head does it creep
and pop from your pen
when you are not aware
or leap from your pocket
or fall from your hair
or is it just silently
suddenly
there?
In a beat
in a breath
in a pause
in a cry
one unblinking eye
that stares from the dark
that is deep in your head
demanding attention
until it is written
until it is rotten
until it is anything else but forgotten
until it is read.


from Moon, Have You Met My Mother? The collected poems of Karla Kuskin, illustrated by Sergio Ruzzier, 2003, HarperCollins
Posted by Meribeth Shank at 12:41 PM 1 comment:

May is for Mothers (FAMILY magazine reviews) 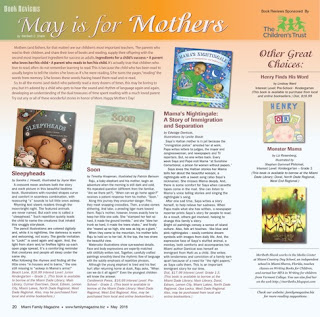 Mothers (and fathers, for that matter) are our children’s most important teachers. The ones who read to their children, and share their love of books and reading, supply their offspring with the second most important ingredient for success as adults.
Ingredients for a child’s success:
1)    A parent who loves her/his child
2)    A parent who reads to her/his child
It’s actually true that children who love to read, often do not remember learning to read. This is because the child who has been read to usually begins to tell the stories s/he loves as if s/he were reading. S/he turns the pages, “reading” the words from memory. S/he knows these words; having heard them read and re-read.
So, to all the moms (and dads!) who patiently read a story dozens of times, this may be boring to you, but it’s adored by a child who gets to hear the sound and rhythm of language again and again, developing an understanding of the dual treasures of time spent reading with a much loved parent. Try out any or all of these wonderful stories in honor of Mom. Happy Mother’s Day!