At lunchtime I bought a huge orange ---
The size of it made us all laugh.
I peeled it and shared it with Robert and Dave ---
They got quarters and I had a half.

And that orange, it made me so happy,
As ordinary things often do
Just lately. The shopping. A walk in the park.
This is peace and contentment. It's new.

The rest of day was quite easy.
I did all my jobs on my list.
And enjoyed them and had some time over.
I love you. I'm glad I exist.


Look, the trees
are turning
their own bodies
into pillars

of light,
are giving off the rich
fragrance of cinnamon
and fulfillment,

of the ponds,
and every pond,
no matter what its
name is, is

nameless now.
Every year
everything
I have ever learned

in my lifetime
leads back to this: the fires
and the black river of loss
whose other side

is salvation,
whose meaning
none of us will ever know.
To live in this world

you must be able
to do three things:
to love what is mortal,
to hold it

against your bones knowing
your own life depends on it;
and when the time comes to let it go,
to let it go.

from Cries of the Spirit: A Celebration of Women's Spirituality
edited by Marilyn Sewell
Beacon Press, 1991
Posted by Meribeth Shank at 9:49 PM No comments:


One day you finally knew
what you had to do, and began,
though the voices around you
kept shouting
their bad advice--
though the whole house
began to tremble
and you felt the old tug
at your ankles.
"Mend my life!"
each voice cried.
But you didn't stop.
You knew what you had to do,
though the wind pried
with its stiff fingers
at the very foundations--
though their melancholy
was terrible.
It was already late
enough, and a wild night,
and the road full of fallen
branches and stones.
But little by little,
as you left their voices behind,
the stars began to burn
through the sheets of clouds,
and there was a new voice,
which you slowly
recognized as your own,
that kept you company
as you strode deeper and deeper
into the world,
determined to do
the only thing you could do--
determined to save
the only life you could save.


from Cries of the Spirit: A Celebration of Women's Spirituality
edited by Marilyn Sewell
Beacon Press, 1991

In honor of Women's History Month
Posted by Meribeth Shank at 7:44 PM No comments: 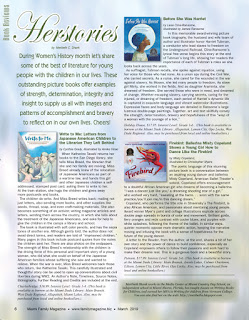 During Women’s History month let’s share some of the best of literature for young people with the children in our lives. These outstanding picture books offer examples of strength, determination, integrity and insight to supply us all with images and patterns of accomplishment and bravery to reflect on in our own lives. Cheers!

Write to Me:
Letters from Japanese American Children to the Librarian They Left Behind
by Cynthia Grady
illustrated by Amiko Hirao
When Katherine Tasaki returns her books to the San Diego library, she tells Miss Breed, the librarian that she and her family are moving. Miss Breed already knew of the relocation of Japanese Americans as part of a wartime law, and hands this girl and other Japanese children a self-addressed, stamped post card, asking them to write to her. At the train station, she hugs the children and gives away more postcards and books.
The children do write. And Miss Breed writes back; mailing not just letters, also sending more books, and other supplies like seeds, thread, soap, and even craft-making materials. She also becomes something of an activist; writing magazine articles and letters, sending them across the country, in which she tells about the treatment of the Japanese Americans, and asks for help to give the children in the camps a library and school.
The book is illustrated with soft color pencils, and has the sepia tones of another era. Although gently told, the author does not avoid direct terms, and readers are told of “imprisoned children.” Many pages in this book include postcard quotes from the notes the children sent her. There are also photos on the endpapers.
The strength of Miss Breed’s relationship with the children is the driving force of this personal and important story of a young woman, who did what she could on behalf of the Japanese American families whose suffering she saw and wanted to relieve. When the war is over, Miss Breed welcomes back those who return, like Katherine Tasaki. This carefully illustrated and thoughtful story can be used to open up conversations about civil liberties during WW2. An Author’s Note, Timelines, Source Notes, Bibliography, Further Reading and Credits are included at the end.


Before She Was Harriet
by Lesa Cline-Ransome,

illustrated by James Ransome
In this memorable award-winning picture book biography, the husband and wife team of author and illustrator honor Harriet Tubman, a conductor who lead slaves to freedom on the Underground Railroad. Cline-Ransome’s lyrical free verse begins this story at the end of Tubman’s long life, showing her readers the importance of each of Tubman’s roles as she looks back across the years.
As suffragist, Tubman recalls, she spoke against injustice, using her voice for those who had none. As a union spy during the Civil War, she carried secrets. As a nurse, she cared for the wounded in the war against slavery. As Moses, she led many people to freedom. As slave girl Minty, she worked in the fields. And as daughter Araminta, she dreamed of freedom. She served those who were in need, and dreamed of change. Whether escaping slavery, carrying secrets, caring for the injured, or dreaming of freedom, each period of Harriet’s dynamic life is captured in exquisite language and vibrant watercolor illustrations.
Expressive faces and body language are detailed in Ransome’s large lustrous double-page paintings. Together, art and text skillfully convey the strength, determination, bravery and hopefulness of this “wisp of a woman with the courage of a lion.”

Firebird:
Ballerina Misty Copeland Shows a Young Girl How to Dance Like the Firebird
by Misty Copeland,
illustrated by Christopher Myers
The poetic language of this stunning picture book is a conversation between an aspiring young dancer and ballerina Misty Copeland, American Ballet Theater’s soloist. Copeland offers encouragement to a doubtful African American girl who dreams of becoming a ballerina. “I was a dancer just like you/ a dreaming shooting star of a girl,” who worked very hard, “sweating at the barre. . . soon with the same practice/you’ll join me/in this dancing dream.”
Copeland, who performs the title role in Stravinsky’s The Firebird, is also African American, and passionate about mentoring young people. Award winner Myer’s paint and collage illustrations explode across double page spreads in bursts of color and movement. Brilliant golds, fiery oranges and reds contrast with cooler blues, and purples with white splashes, following the theme of the ballet. In similar ways, quieter moments oppose more dramatic action, keeping the narrative moving and infusing the book with a sense of hopefulness for the future of the young dancer.
A letter to the Reader, from the author, at the end, shares a bit of her own story and the power of dance to build confidence, especially as Copeland empowers others to follow their passions and work hard to make their dreams real. This is a gorgeous book and a beautiful story.